On a Wing and a Prayer

What critics and Readers have said about On a Wing and a Prayer:

“… the events and storyline have been both gripping and entertaining  … sadly, I have only six more chapters of the novel to read. … I can’t wait for the next part of the Graham family saga to be published.”.

“’On a Wing and a Prayer’ weaves a compelling and poignant story of Britain and its people as they waited, indeed expected, to be invaded and over-run. Action, excitement, romance and tragedy are skilfully woven throughout the novel. Mixed in with all this, the novel combines a rich and credible narrative exploring and examining the disparate relationships of the story’s principal characters each experiencing the stresses and emotions of everyday life in wartime Britain from different perspectives.”. 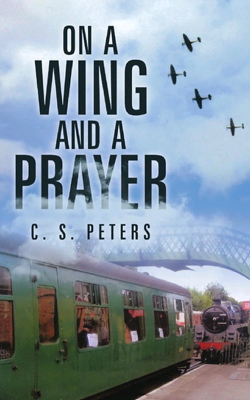 A synopsis of the novel:

It is 1940 and the Battle of Britain is raging fiercely in the skies above Great Britain. On a Wing and a Prayer is the story of James Graham, a young Fighter Pilot, flying Hurricanes in the daily combat of the Battle.

The novel vividly describes James’s apprehension and fears of being the “new boy” on the Squadron. Through passages of descriptive, exciting, action-packed narrative, the story takes the reader – as if in the cockpit with James during dogfight action – to when he becomes an experienced and seasoned Fighter Pilot fighting for survival. During this time he also has to come to terms with the loss of  Squadron comrades and friends and other personal tragedy.

Through its characters the novel also tells what it was like, not only for James’s family but also for civilians, evacuees, rescue workers, those working for the War Effort and for all those in Britain as they awaited, indeed expected, to be invaded and over-run.

On a Wing and a Prayer is the first part of the compelling story of the Graham family as they and others live and survive through the Second World War.

An excerpt from the book:

“As James pressed the gun button, his target veered sharply away, James’s tracer streamed harmlessly past the German bomber’s tail-plane. Cursing, James hauled his machine hard over to his right to chase another. As he did so, he fired an instinctive two-second burst at a swerving bomber as it fleetingly swept by directly in front of him. A shower of empty shell cases clattered down on his canopy as its pursuing Hurricane fired furiously. James continued to chase his Dornier, now in a spiralling climb desperately seeking some cloud cover. James put on emergency power and closed on his prey. He briefly glimpsed a blazing Dornier plunging vertically down over to his left. His target’s belly began to fill his gunsight and he gave a two-second burst. Simultaneously, his Hurricane shook and jumped violently. He was deafened as cannon shells exploded all around the cockpit … He was blacking out with the force of “G”. Quickly, he tried to negate the effect – his vision began to clear and he levelled out to see an Me109 swooping down past him. The cockpit was now full of fumes and the stench of cordite. Streaming sweat welded his mask to his face.”

Copyright © 2020 C S Peters
We use cookies to ensure that we give you the best experience on our website. If you continue to use this site we will assume that you are happy with it.Ok